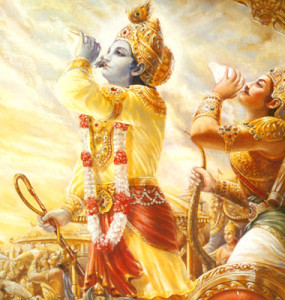 Revered by well over a billion people and honored by many millions more, Bhagavad Gita is one of the most important spiritual classics in world history. Bhagavad Gita literally means Song of God and chronicles the sublime dialogue between Arjuna, a warrior prince, and his friend and confidant Krishna who is much more than what he first appears to be. Arjuna questions the meaning of life, the reasons for sorrow, and the confusions and moral dilemmas that confront us all. The Gita is a concise guide to the cream of Hindu philosophy, what is known as Vedanta. But it is so much more. It is, in reality, a practical, self-contained guide to all human life in its vicissitudes and mysteries. It has been described as ‘a lighthouse of eternal wisdom’ and has the ability to inspire any woman or man to supreme accomplishment and enlightenment. All Sacred Texts come from particular places and particular times, but the truly epic ones rise above the limitations of time and space. Bhagavad Gita is one of these texts. It presents a story that resonates with human beings everywhere. It speaks to us all, whatever our backgrounds, whatever our spiritual paths and commitments.